The leading ideologies of our time—capitalism, communism, social democracy, and fascism—are all mired in 20th century Modernism.

Modernism implies that there is an objective reality of economic relations, social issues, race, science, and so on. It also implies that everything is possible using concrete tools.

In our modern, or rather postmodern world, there is no truth anymore. We have an endless amount of research but lack vital information. This leads us to realize that endless movement to some specific goal is a mirage. Postmodern “reality” is actually a perpetually shifting myriad of realities, each with fragments of many older ideologies.

Seeing how postmodernism is more flexible and dominant in the West and modernism is more mechanical and dominant in the East, we can assume that future ideologies will be based off the world’s differing historical and economic realities. While technology doesn’t make ideology, it can be used with the previous two factors to re-shape and re-brand old ideas, or simply to create new ones; be they modernist, postmodernist, or even meta-modernist.

In 1919, American engineer Howard Scott created the Technical Alliance—a group of scientists opposed to the “wasteful capitalist system.” Their ideas would later be applied to the Venus Project. The core of this system is a resource-based economy ruled by committees of scientists specializing in a specific area of society.

Today, it would not be people governing society, but a super-intelligent AI, much as the Soviet writer Yefremov predicted. Technocracy has many similarities with communism, but a markedly different end goal.

While communism is meant to make a system more suitable for the improvement of human abilities, technocracy uses transhumanist tools to merge a human and machine into a higher form of productivity. Technocracy is deeply modernist and utilizes accelerationist means.

Techno-corporatism is a compromise between the competing forces of capitalism, socialism, and technocracy. Park Chung-Hee used the power of corporations to greatly expand South Korea’s economy while using the government’s power to crush anyone who disagreed with him. Some other developing countries, such as Singapore and Chile, have used dictatorships in order to industrialize. This process may work for echnological revolutions such as China, having a five-year AI development plan in addition to the South Korean government’s unmatched scientific funding.

By combining an iron-fisted government with corporations, unions, and the educational system; countries could easily create a highly technological society ruled by state capitalism.

Advances in technology have left the masses behind, especially people who are not in the epicenters of innovation. This has led to a populist reaction globally; evidenced by the elections of Trump, Bolsonaro, and other populists. Some of these regions, deprived of the fruits of technological progress, may begin thinking about ethnic replacement and how they can enact racialist policies in order to create an ethnostate. There will now be many countries with a weak economy and strong ancestral tradition. With technology like DNA analysis and government surveillance/defense tools, these states could create racialist and ethnonationalist utopias in order to preserve their traditions. This is not only to enact protection from threats like migration, but to shield from threats of technological revolution involving uncontrolled augmentations and artilect war. These conservative and closed-societies may be able to augment super-soldiers and AI defense systems, but only for protection of the state.

Technology now makes it possible to manage the people without the government-machine deciding what is good for people. For example, the citizens of Iceland wrote their own constitution online. Future societies will be able to take care of themselves using everyday tools, souring from AI that can solve problems in real-time. Decisions will be made through votes secured by the blockchain and DNA verification. Data will be open to everyone, ensuring ultimate transparency.

Differences in human personalities, experiences, and brains will make this kind of system chaotic and self-destructive; but this will be managed by merging human brains together so we will visually witness the processes that inform their decision making. Through linking human brains with AI, we will now have knowledge beyond our wildest dreams.

As Thomas Piketty wrote in his book Capital in the 21st Century, the growth of wealth inequality means we are on the cusp of a new Gilded Age or even a new Feudal era.

In the 19th century, very few people could get wealthy on their own. Balzac’s books tell us stories about members of the bourgeoisie who try to get into the elite through the two main sources of upward mobility: marriage and inheritance. The deification of the self-made entrepreneur reached its height in the 20th century.

While upward mobility is possible, with residents of Silicon Valley going from being dropouts to billionaires in just a few years, they are a small percentage of people with a large percentage of the pie.

Modern technology and transhumanism will allow the wealthy and influential to further segregate themselves from everyone else, who will have to deal with their various cyberpunk-style monopolies in charge of everything, making democracy even more of a farce than it already is.

While the above ideas are the most likely scenarios for the future, what if we could face meta-modernist ideas?

Meta-modernism is the idea of shifting between two radically different ideas and synthesizing them in an ultimately novel way. I have one specific philosophy in mind here.

As each society chooses one paradigm, be it a technocratic dictatorship, neo-feudalist kingdom, or a neo-anarchic technological democracy; humanity could still invent an effective system to regulate these ideologies. These could be formal systems like NATO, or informal systems like BRICS, with groups based on varifying ideologies. This system would provide a valuable way of preserving the diversity of life.

Alina Gorina is a transhumanist thinker from Russia who is working on accelerating technology and politics all over the globe. She believes that some processes are inevitable, and stresses that it is important for people from all sides to get ready for what is to come next. 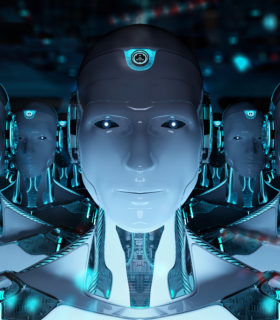