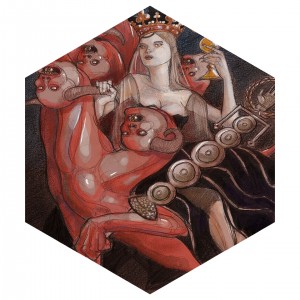 I didn’t charge that guy to have sex with me. I didn’t even charge him to shake my hand. I knew I was breaking the law, but the whole thing just felt wrong.

You ever get the feeling that obeying the law is disobeying something inside yourself? Not like some religious thing, but like some virtue thing? That’s sort of how I felt that chilling night of December. It was the night that I went to prison for shutting off my money-meter. The trees were blowing at me ominously for going against the all-sex-is-work law. It was the night I decided that I would no longer charge men for my interactions with them. It was the dreadful night I became an enemy of the state.

This guy Darren was obviously poor; his disheveled clothes made up his entire personality and résumé. He reached out his junkie-ass fingers to shake my hand. I felt an immediate twinge of pity for him, like any normal person would. My money-meter was flashing like a giant robot-hive, but I decided to shut it off. I shut if off with the flick of my wrist, breaking the law in order to obey myself.

Agency, they called it.

The year was 2065. The Sex Workers Collective of America ran the nation, training us attractive women (unattractive women were now labeled as “men”) to be these high-priced valuable goods. “Luxury items,” they called us. They taught us everything at the Sex Work Academy of Social Research. We had sex appeal that men didn’t, and this is what put us above them. We weren’t allowed to talk to anyone without charging them first. If someone were to compliment us, we had to show them the bill. Allowing someone to be nice to us without asking for payment was a capital offense.

This may seem odd to you, dear readers of the Antinet, but democracy continued to evolve.

Soon only registered sex workers were allowed into office. The infamous riots of 2020 marked a massive change in history. I wasn’t there when the bill was written, but I know that it was written for our gender in the name of the free.

As the story goes, Old President Pool made a vital mistake. He refused to let the head of the Sex Workers Collective of America appear on national television, not calculating the risks of this unpopular decision. Marissa K. Tilla was a brutal one, and people knew better than to mess with her. She had various Social Engineering degrees, so the hackers prayed to her statues in the park. When Pool denied her access to the national port station, she mobilized her troops.

“Whorephobic!” the crowd chanted against Pool, running after him with these giant slaughter-torches. Performance art, they called it, and they assassinated Pool on the spot.

That was what they called his murder, and I suppose in the end that it was.

Our population grew fearful of the SWCA, allowing them to take up positions in federal office.

I sit here imprisoned for defying Marissa and her troops, but I admit that they basically gave birth to me. Have I become entitled? I didn’t go to the Sex Work Academy of Social Research for nothing. I never thought it would get this bad, but here I am, a pariah among the rabble itself. The ultimate shitqueen. I’m told that one of Marissa’s assistants is going to get me out of here, but she never comes. I start to wonder if she even exists.

I flash back. Girl in alley getting de-agented. Screaming help me now someone please help me.

Reporting to the hive-police and getting stopped on spot by the SWCA.

“There is nothing wrong with your role!” they chanted in their hive-skirts, crushing her against the wall in their highest of heel-bots.

“Only you can de-agent yourself. There is nothing wrong with your role!”

“Yet the thugs in the suits. They forced me to…”

“You are the one with the force now. You are the luxury sex. You were filling up your money-meter.”

They shut down alley girl for speaking poorly of her role. Having sex was only a choice, and implying anything else went against their new government empowerment program. If you were a woman who refused to charge for sex, you were forced to get a sex change operation at the age of 18. (They called it “becoming a man.”) The economy needed to thrive, and with so many desperate losers needing a fix, it was only reasonable for women to be in this position of privilege.

They turned alley girl into a man the day she called the hive-police. You never report a de-agency, as it hurts the reputation of the SWCA. You can’t hurt their reputation with your personal stories, they say. You never go against the Sex Work Academy of Social Research. They call alley girl Bradley now, but to me she’s just another whore.

I used to do exactly what they told me. A guy would come up to me and ask me for my name. My money-meter would flash.

“That will be five hundred dollars,” I’d say. The guy would insert his money into my bank-bot, and I would then proceed to give him my name. It was only the law, and all I had to do was follow it. Yet when I met Darren, that damn ugly junkie, I turned my money-meter off. He was just too pathetic for me to charge. It was my agency talking.