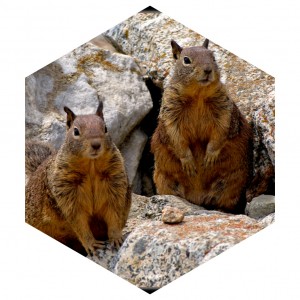 When mandatory smartphone upgrades came through, Dwayne he had dropped off the grid. That was decades ago, he supposed. Living along the tracks with the bums, he had rarely had access to accurate times, let alone dates.

When the National Chipping Initiative and the Federal Ban on Homelessness came through, and the sweeps began, Dwayne had gone feral, living in “tweener spaces” off the land, hunting rabbits, cats—not dogs though—and squirrels, damned squirrels!

He had grown old and tired; his heart rate elevating for no reason, dizzy spells becoming common. He needed easier prey, so he staked out an old-age home where a lady pensioner fed the squirrels. Easy prey, they were. Steal some of her nuts; leave a feed trail, and whack—thank you very much: dinner.

Unbeknownst to him the tweener space between the home and the service road to the dump was under scan.

So now he walked before the Mental Health Agency goons with his hands webbed behind him. They were gentle enough, making sure he did not bump his head when he boarded the wireless coach.

The coach was jammed with shaded folks, the streaming video reflecting dully on their cheeks. Not a word was said. A hand—a big goon hand—when needed, would direct him this way and that.

Not long after his capture—an event so simply and humiliatingly accomplished that he doubted it merited the term “manhunt”—he was being shepherded by the kindly goons into the Optical Offices of Conner, Gwynn, and Bloomfeld. Young people with the air of “The Press” about them, but with no microphones or cameras, crowded about him, asking him questions:

“Are you Dwayne Gridless?”

“Dwayne, how did you survive without upgrades?”

“Gridless, Gridless, is it true that you are a Feravore?”

“Dwayne, did you know that your last victim’s name was Norman?”

“Mister Gridless, how does it feel to be responsible for the murder of the Sunshine Homes mascot?”

“Dwayne, did you know that you were the last of your kind—that you are the passing of an age?”

“Dwayne, Dwayne Gridless, is it true that you have a buried stash of gold? Ted Gridless said…”

With that, Dwayne was hustled through the doorway to the Optispectric Suite. His handprint was scanned over and over again at the podium. The attending Mental Health Advocate kept adjusting the scanner to account for his own self-mutilation. At last he came face-to-face with the realization that the painful burning of his fingertips had not dropped him out of the datamine. He was confirmed, sprayed with deodorant, and seated right there.

Now webbed into the chair, he was autoloaded into the blue-lit space behind the curtain, a curtain that seemed to dissipate as he rode through it on the wireless seat. The things that he had seen from afar and wondered at in horror, and the tales told him by escapees like Ted and Alvin, were now one with his life, inseparably insufferable aspects of his new existence.

He looked up into the eyes of a very pretty young man, who was keeping his eyelids up with a magnet and dripping stuff into his eyes with a dropper. His voice was very sweet as he fitted Dwayne for his shades. The screen was black at first, then blue, then blank, then all of the colors of the rainbow as he spoke words that he would never speak again:

“Sir, to discard the shades is possible, but will be painful. It is not advised. Do not think that discarding the shades will take you gridless again. This is not possible. You have just ingested a self-propagating isotope. You are online, Dwayne. Welcome home.”

With those few words he was autoloaded into a sanitizing station, where his shades narrated his scrubbing, showering, and inoculations, and related irritating requests for attire preferences. He answered not, could not bring himself to cotton to some damned computer. He found himself suddenly and excitedly aware that the shades could not read his mind.

He remained silent until he was dressed, groomed, and autoloaded out the side door and ejected onto the lawn, feet first, sitting on fine blue grass with a flowery scent.

He was fairly certain that the nosy ones from the lobby would be around to badger him with questions, and knew he could not hope to outrun such young folks—and there they were, coming around the corner!

Dwayne spotted it there, an old-style hybrid bus chugging up the street, and darted as fast as he might out into its path as the nosy ‘reporters’ howled in fear. Sweet oblivion, he thought, take me!

Then the bus stopped, barely kissing him, as its onboard narrator droned, “Pedestrian intact, will continue when clear.”

Anger now flashed like a flame in his brain and he surged for the oaks across the street. A private vehicle likewise stopped and announced his passage, the occupant not even driving, but enjoying whatever transpired on the inside of her flickering shades.

The shaded people clamored behind him, beseeching him for interviews as he scaled the oak with all of his remaining strength. Up and up he went, and finally out onto a branch, some sixty feet above the sidewalk. People yelled beneath him. As he neared a squirrel’s nest with two late-spring young nestled in it, the mother squirrel screeched angrily at him.

He glared at the angry squirrel, snatched the nest with its innocent young within, and leaped out over the sidewalk below, voicing the last defiant words of a defiant life:

He enjoyed a momentary sense of freedom that seemed to wash the bitterness of his capture away. Dwayne suddenly felt a pang of guilt for the young squirrels. He twisted so that he would land on his back, the nest cradled on his chest.