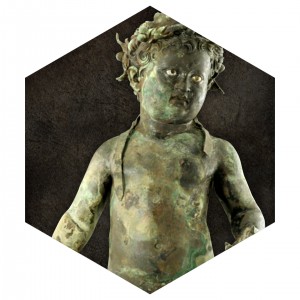 CHAPTER ONE of LYFE, the upcoming novel by ANN STERZINGER

(In which a mortal attempts revenge)

In the stand of artificial trees that separated a large, well-lit house from the grandest boulevard in the City of Heaven, a figure sulked in the shadow of a tin magnolia.

The tree was hand-coated in green enamel, with ever-pink and grey flowers in the shape of folded hands. Five years’ display outdoors had left its articulated leaves slightly chipped where they rustled against one another—though of course the magnolia hadn’t fared as badly as the unpainted iron oaks did in the public parks, where they accumulated an artificial underbrush of used junk food bags and syringes.

The intruder’s hands parted two low branches slightly. The arms were barely long enough to help the hands emerge from an immense floor-length black hooded cape with a stiff internal collar and red-lined swirling sleeves that dipped to the ground. The cape was stolen.

The figure was tall enough to be a man, short enough to be a woman, with an ambivalent bone structure, muscles taut with purpose, and a largish but reasonably well-shaped nose that stuck out in profile. The person inside the tense shell wanted to feel mysterious, stagey, and dangerous, but had shot too much of a stimulant called Lyfe before the mission. The cape trembled as spastically as the tin leaves did in the breeze.

The costume shook harder as the front doors of the mansion slowly parted.

The doors were three meters tall and as thick as a soldier’s shoulders, carved from solid blocks of tiger’s-eye stone. Electric torches cast a theatrical light on the long flight of steps that framed them. They would have given the hilltop mansion the air of an ancient mountain cave, full of dwarves or orcs – if only it weren’t for the rest of the house.

The roundness of ten trendy egg-shaped turrets clashed nauseously with the pointy baldachins that stuck out at random spots on an irregular hexagon of high walls. The roof was covered in gold leaf, and in place of gargoyles, statues of the Muses perched on the profusion of corners and turrets. Silver planters sprouted beneath every one of a hodgepodge of whimsically shaped windows, and tin foliage sprouted from the planters; the front of the house was draped with hard waves of ‘tulle’ made of gilt aluminum. It was a breathtakingly pretentious confection; the doors lent it an incongruous touch of dignitas.

The figure made a bet with itself that it could guess which spouse had designed the house, and which had only gotten to choose the doors. The unwanted personage chuckled as the portals’ pneumatic machinery drew them far enough apart to let the lady of the house emit one designer-heeled little foot.

For a moment the foot was the only living thing on display. The lady Miranda was, no doubt, as she always had done, pausing to check her bag for forgotten lipsticks, to count her paper money, check her credit card and house keys. It was nonsense behavior now, just caked-on habit. The huge doors recognized her voice print and the chauffeur of her carriage knew her like a nanny; she was too healthy-looking to need lipstick, she was too rich to worry if a bit of cash had fallen from her purse. But she had always had an obsessive-compulsive streak, the uncomfortable underpinnings of her talent.

The sight of the familiar behavior was jarring in the doorway of a mansion; it tugged at the intruder’s throat, attacked the nerves with old images of the lady as the girl she had been: intently practicing ballet steps, a hundred, two hundred times, soaked in perfectionist’s sweat, a million moments ago… Finally, in one graceful chassée, the rest of lady Miranda came out, tucking the bag under her arm.

Lady Miranda wore an evening cape herself, but it was of the open, dinner-party variety. Its pink ersatz silk warp was stiffened with a woof of gleaming bronze thread, and its brooch was carved from her signature tiger’s-eye stone; it kept its shape but flowed along with her leonine spine as she trickled down the front staircase. Each gilt-rimmed stair had been inlaid with mother-of-moon-pearl and more large, perfect round tiger’s eyes.

Ah, the intruder sneered: such power she has! What power of art she gave up for the power to order mortal workmen to make her tacky mansion match her clothes!

The air of the Olympic District was perfumed with synthetic gardenia. Earth Two was now rising high in the evening sky; its diseased-looking surface threw a bilious green glow over the entire neighborhood, graceful old mansions and ostentatious new terrors alike. The big planet cleared the roof of Miranda’s happy home, and she lent both objects a brief, mildly disgusted glance over her shoulder. The concentric rings of golden minerals below her feet seemed to blink at the ugly glare as her shadow flickered over them. Smaller tiger’s eyes coated the bodice of her side-slit gown like an all-seeing, tawny coat of armor; though her favorite stone was only semiprecious, she had remained faithful.

Ha ha ha! Faithful. Glad she’s faithful to something. It just figures that it’s a fucking rock. Wouldn’t do to confer any lasting benefits on a creature of a day.

The combs in Miranda’s black hair were tiger’s eye as well. The stones accentuated her smooth, deep golden skin and set off the roses in her cheeks. Her face glowed wholesomely, like goat’s butter. Though she was only three-eighths Immortal by birth, her marriage to a full God seemed to have agreed with her; her taut cheeks and the free play of her liquid joints still gave her the air of a virgin in a nineteenth-century Earth I soap advertisement.

The lady paused to look left and right as she passed the stand of metal trees at the foot of the stairs; she didn’t seem to sense danger, however. No, she’s looking to see whether any other celebrities are out noticing her… Ha ha ha. Well, I might still become a celebrity someday. If every Immortal actor in the City of Heaven dies…

Miranda tapped her bronze wristlet and the street in front of the house vibrated slightly. At a leisurely pace, a large block of cobblestones detached itself from the surrounding stones and sank six inches into the earth, and began to retract; the panel revealed a dark hole, twice the size of a grave.

For the rest of the chapter, click here for Part Two.