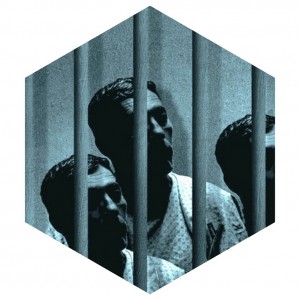 The prisoners arrived today. Eighteen antisocial personalities—six bona-fide DSM-IV psychopaths—all serving life sentences. I watched them debark and line up in two rows of nine beside the bus, radiating the very resentment and animal aggression that make them perfect test subjects. One (#28274583 – WALLACE, Daniel [aka. “Gootch”]) glared at me with such hatred that I felt a ripple of fear despite being twenty meters away behind armed guards. Prisoners will be under observation twenty-four hours per day, and in lock-down except when participating in the study. Clinical trials begin tomorrow.

I’ve been given administrative help. Corrections has, per its contract with the medical school, furnished support staff; in my case, clerical (literally). Father Anthony Lazar, SJ is a prison chaplain (Jesuit). He helped load software onto the office PC, then accompanied me to the room where we would administer the first round of personality tests. I was handing out test booklets when one of the subjects (#16108597 - GOMEZ, Gerardo) grabbed my wrist and pulled me down into a choke. The SWAT guard was still scrambling for his weapon when Lazar intervened and applied some kind of joint lock. I’m not sure what happened next, but when I rose to my knees, the room was crowded with SWATs and Lazar was administering first aid to a screaming, bleeding Gomez. The Jesuit is proving useful.

Finished crunching the MMPI stats (Lazar did most of the work). Results confirm: all eighteen incorrigibles are likely beyond rehabilitation. After some hesitation, Lazar helped prep the first round of medication. “This little pill is supposed to succeed where three millennia of ethical philosophy and organized religion failed?” I explained the unique properties of AltruTek™. Lazar took up the tray and followed me. “A pill to make men moral.” He shook his head. “And if it works, then what does that make the men who administer the pill?” I had no answer.

An incident in the cell block today. Wallace (“Gootch”) killed a fellow subject (#82157936 - WASHINGTON, Lawrence). Because Gootch is white and Washington was black we ordered a pre-emptive lock-down. I doubled Gootch’s dose of AltruTek™. Lazar’s jaw tightened but he passed the cup through Gootch’s door-slot without objection. We finished our rounds and returned to the lab. Around nine PM one of the SWATs came and told Lazar that Gootch wanted to see him. I caught up on paperwork. When Lazar returned, his expression was blank. He lowered himself into a chair with the elaborate care of a man twice his age. I asked how his meeting with Gootch went. “It’s a miracle,” he whispered, fingering one of the AltruTek™ capsules reverently.

Have released Lazar to attend to a growing number of clerical requests. The medication is affecting the control group; Lazar intends to hold his first service for a group of subjects later. When I responded to this with some crack about AltruTek™ doing nothing to improve IQ, Lazar shrugged. “Religion provides a channel for Man’s innate moral impulses.” I pointed out that the impulses in this case were not innate but instilled. Lazar replied: “Saint Paul came to God by a blinding flash. Why not a pill?”

Second round of MMPI testing is tomorrow but it’s unnecessary; the results of the medication are self-evident. Although security precautions continue, the SWATs are allowing subjects out “into population” to socialize (or participate in Gootch’s project to build a life-size cross for the community altar). Services are twice daily and Lazar has a rush of eager converts. Subject compliance is extraordinary (SWATs are routinely called “sir”). My department chair called to finalize details for next week’s press conference, in which the trials will be revealed and AltruTek™ declared a bona-fide pharmaceutical miracle.

There’s been another incident. Apparently, Lazar is injured. The SWATs have us in lock-down.

Twenty-four hours and no word. Forced the lock on the lab door and peeked out. Hallways crowded with dead SWATs. Their weapons have been lifted. Returned to write this and call for help. UPDATE: Phones inoperative. Lines cut???

Gootch and a group of his fellow subjects (armed) came to the lab this afternoon. Under his gaze, they gathered and confiscated the entire store of AltruTek™. “All your work is based on a lie—the secrecy of this project.” Gootch silenced my objections with a raised hand. “Father Lazar tried convincing us that, because it would eventually be revealed, the project is moral. But revealing a lie next week doesn’t make it true today. The Light will not allow us to participate in such deception! Father Lazar has made his restitution. You will make yours.” He placed a bottle of AtruTek™ before me. “We have the surviving SWATs next door. For each hour you fail to take these pills, we will shoot one.” When I challenge his ultimatum on moral grounds, Gootch shrugs. “In service of the Light,” he says. I must assume the drug has some side effect that spurs psychosis.

The goal of AltruTek™: to catalyze the chemical reactions responsible for and open synaptic pathways associated with altruistic behavior. Perhaps these same pathways have off-ramps to darker areas in the human psyche. I sketch notes for regression models as I contemplate the pills left for me. “A pill to make men moral” as Lazar had it. But I consider myself to already be moral. Even our experiments on live humans—specifically forbidden by treaty and law—have been secretly authorized at the highest levels. I would not participate otherwise. But the mocking presence of those capsules in the bottle, an armed guard at the door (#00042831 - HARRISON, Mitchell) and the imprisoned SWATs leave me no choice. I take a breath and unscrew the cap …

Nothing. It is possible the drug has no effect on someone with a “normal” MMPI profile. I carry on with my search for an antidote. Gootch’s planned “restitution” is a joke. But I can console myself that I have done all I can to save the lives of the SWATs next door.

Or have I? The SWATs’ lives are in jeopardy because of this study. But am I its sole author? To be sure, I was on the team that isolated the chemical blueprint for AltruTek™ and drafted the plan for this study. So am I solely responsible? No. But perhaps seeking an “antidote” is my avoidance of a deeper moral culpability. Because who else beside me can answer for this here and now?

I AM responsible for placing the SWATs’ lives in jeopardy. If I wanted to, I could go over there now and attempt to free them! I would be killed in the attempt but until I try I cannot truly “console myself that I have done all I can.” The human capacity for self-deception is monstrous! Searching for a “cure” to what I’ve unleashed is just evasion.

The glare of my personal failings is blinding. I looked in the mirror a minute ago and saw clearly for the first time that I am a failure, a coward, a moral cripple serving an inhuman paradigm. That I could ever fool myself into believing psycho-pharmacology is anything but glorified lobotomy is shameful. Seeing Truth with such blazing clarity is intolerable. Foraged from the clinic: a scalpel, a large bottle of Percocets. Will seek refuge from the glare in final darkness.

Out of darkness — Light. Deliverance! The door opens and …

The road is a gleaming rain-washed ribbon of gold below the wheels of our bus. Two of the SWATs, one of whom is now driving, have joined our crusade. The rest have been left behind, asleep at the foot of the altar before which I was rushed and fellowshipped into the Light (and above which Lazar now hangs in restitution for Christianity’s fundamental denial of the Light). So far we have picked up four hitch-hikers. The one who remains alive has willingly undertaken his journey to the Light. In another hour we will enter the city. Once we have established a suitable base for the crusade, I will construct a lab in which to synthesize more AtruTek™. The SWAT radios will enable us to listen in on those who would oppose us. The only thing more beautiful than the light reflected in the shining highway is the faces of my brothers, those deemed “incorrigible” by an unfeeling system. I wonder how I could ever have considered myself superior to them. These were the shadows of a benighted mind. The Light has gifted me with True Sight, as it has liberated us from our common darkness. The Light is unstoppable. And together, we will go forward to bring it to the world.